Back in the 3/3.5 days of Dungeons & Dragons there was a series of modules called Dungeon Crawl Classics published by Goodman Games. Its tagline was something along the lines of "Remember when adventures were underground and NPCs were there to be killed..." I saw these at a few conventions and never thought much of it because I'm not really one that responds to appeals to nostalgia (particularly a decade ago when I was still a young man), because like Wu-Tang say, "Good old days good old days, let's talk about the good old days."

A few years after that, a friend of mine named Matt told me how his old dungeon master, who was the best he'd ever played with, had started publishing adventures for the Dungeon Crawl Classics line. I thought it was neat, but not enough to buy a Fourth Edition adventure written by Harley Stroh. A personal recommendation did put a seed of interest in my head.

The years kept passing by and I still had never read a Dungeon Crawl Classic. I was at Con on the Cob, an excellent convention in the Greater Cleveland area (on the Akron side of things) and in the dealer hall there was a guy with a rack of photocopied D&D stuff. The one that stands out in my memory is Metal Gods of Ur-Hadad. I asked this guy, Roy, what was up with all this stuff, and he told me it was all for this game that just came out, the DCC RPG. Huh? Dungeon Crawl Classics once again. He gave me a run down and now I was finally interested. I was a bit tight on cash so I didn't pick up the book. I thought while it sounded cool, one rule set is as good as any other, so what do I need another D&D for? But these punk zines about D&D were an awesome thing that I was pretty stoked on.

Finally Gen Con 2015. I was walking through a hotel lobby when this dude with a beard asked me if I wanted to get in on some D&D. The game was Catastrophe Island II, overseen by Doug Kovacs. I finally got to play DCC, and holy shit, it was awesome. The next day I entered the Enter the Dagon tournament run by Harley Stroh. This was my first glimpse of the magic system of DCC, holy shit, way awesome. After the convention I started talking about DCC on G+ and everyone was totally cool, which was surprising, because a lot of time the internet is the worst.

It's tough to explain exactly what makes DCC so great, but this illustration by Doug Kovacs fron the rulebook is a good short cut: 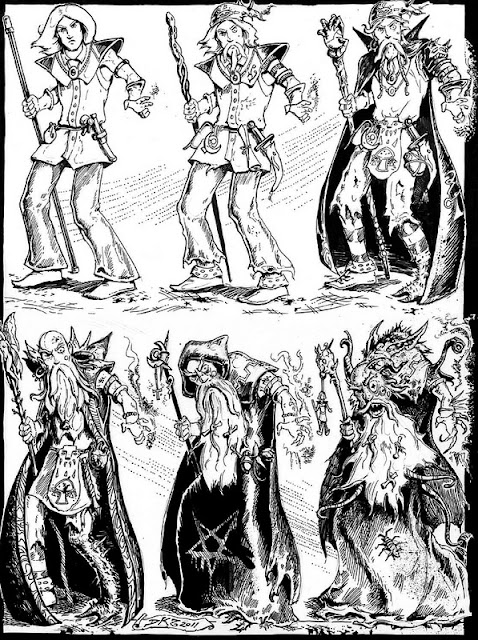 Magic is dangerous, your character starts of as one of four and is maybe good at shovelling shit, but nothing of use in a dungeon, and you push buttons and sacrifice goats and hens from your farm in a desperate attempt to make it out of that cursed locale. But really words don't do it justice. If you live in the Cleveland area stop by the shop any Thursday at 8 pm to get in on a game.

The hardcover is well worth the $40

The dice chain mechanic is not only a slick way to apply bonuses and penalties, it's also an excuse to bring back the weird witchiness of crazy dice. Rekindle the lost wonder of the 20 sider with a d5 or a d16. These dice are just the weird dice DCC uses, you probably already have plenty of the others.

Last but not least, the modules for DCC get across the crazy possibilities of an RPG. They draw on Appendix N stuff for inspiration, and reminds us how Lord of the Rings was only one fantasy work among many that was a foundation for D&D. Hawkmoon fantasy in a post apocalyptic world, Dunsany tales of wonder, Martians and dinosaurs and robots. Add to the mix a dose of Roky Erickson and you get a great adventure, The One Who Watches From Below.

Or you can get ten of them in a treasure chest of Shudder Mountains and Starless Seas.